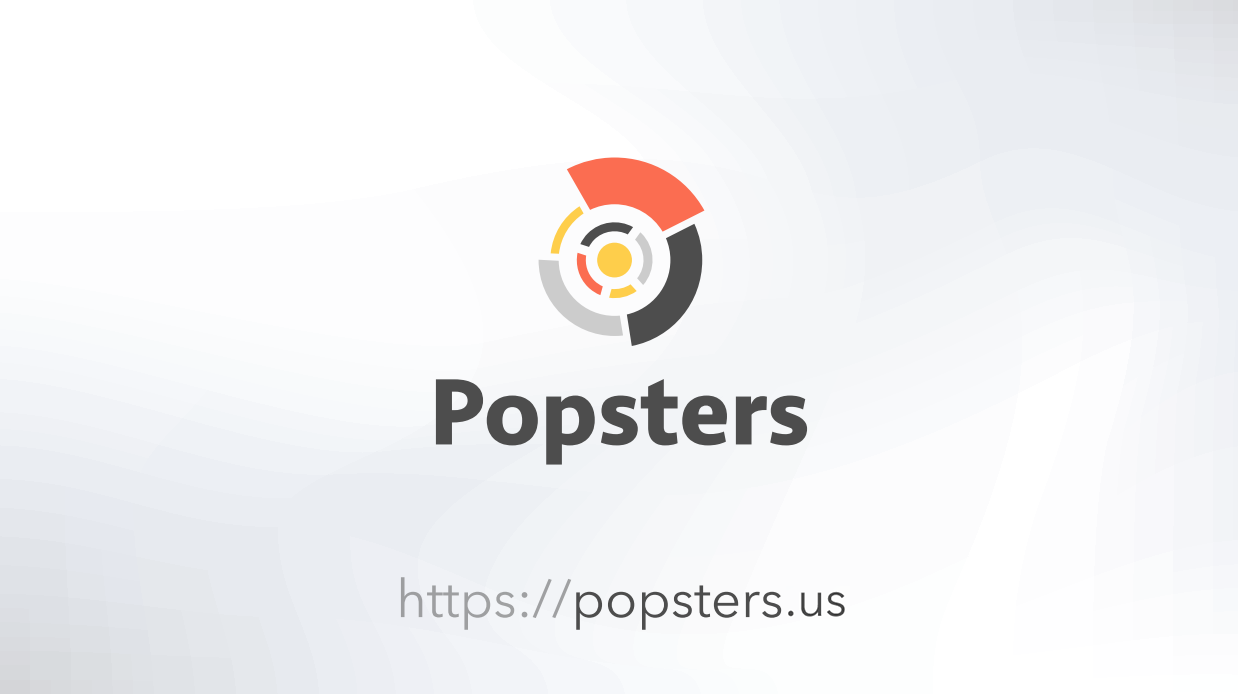 Audience activity on different social media may vary depending on popular content format, algorithmic feed, hour of the day, day of the week and multiple other factors.

Based on community analyses done by Popsters users in 2018, we aggregated data on 580 thousand various public pages on 7 social media, considering summarized characteristics of 460 million posts.

We share the study’s results, discussing the hours of the day and the days of the week performing best for posting, ER ratio and post count with subscriber count, interest in posts with different text lengths on different platforms and many more.

For the detailed methodology and full version of the study, read:

A study of audience activity in Social networks in 2019.

Sunday and Monday turned out to be the most popular days on the average on all social media. Last year, users generated most of the activities on Tuesday.

The study results show that the Social Media activity remains almost constant during a week, with a little decrease noticeable on Wednesday.

The day with the highest activity on VK is Monday. Decrease is noticeable on weekends, especially Saturday. 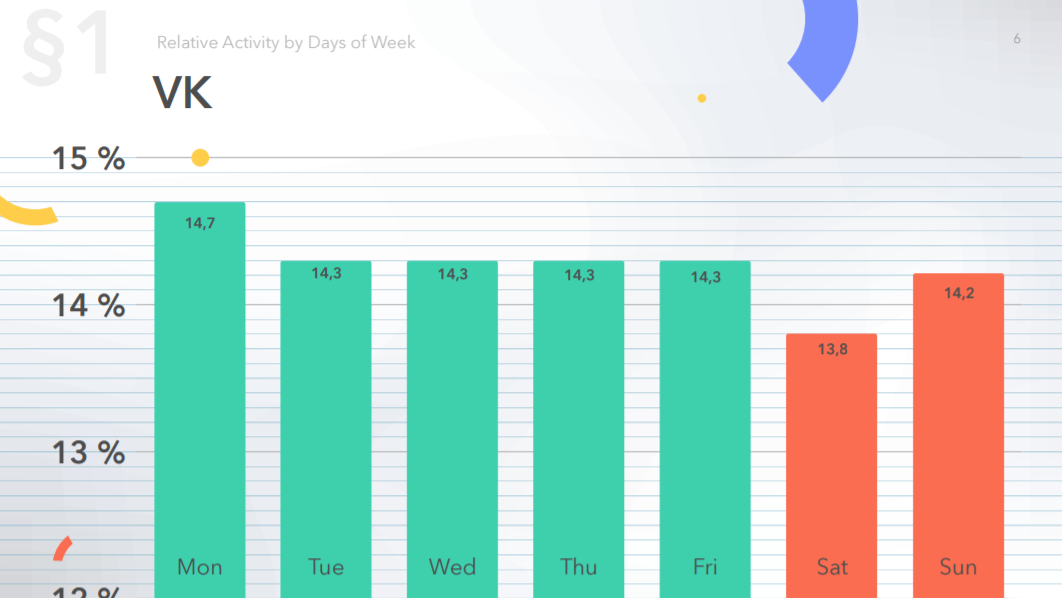 Facebook posts, on the average, gained the highest engagement on Monday. There is a decrease on Saturday; Sunday, however, doesn’t differ from weekdays. 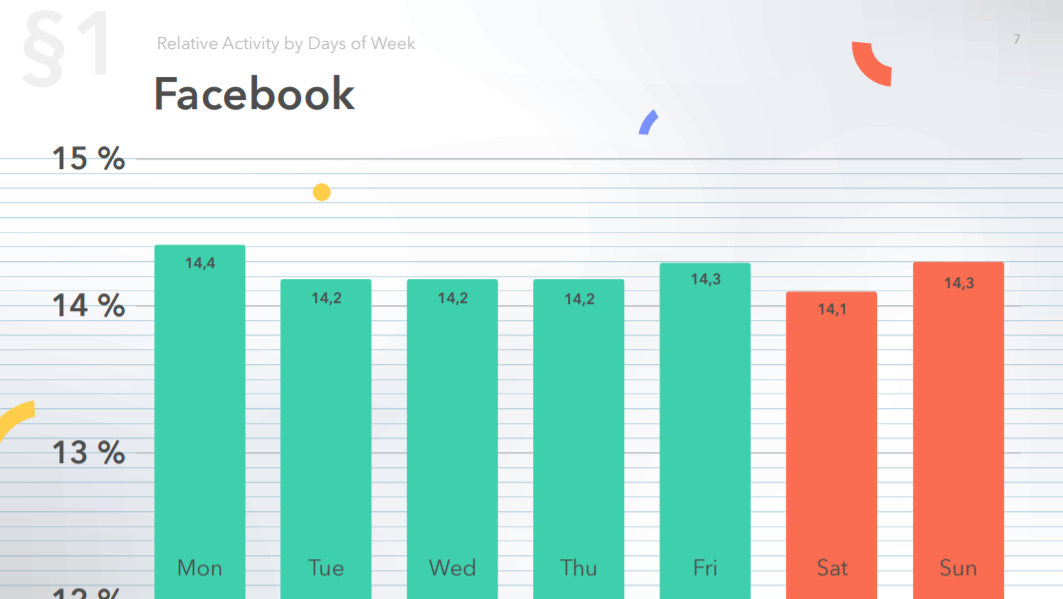 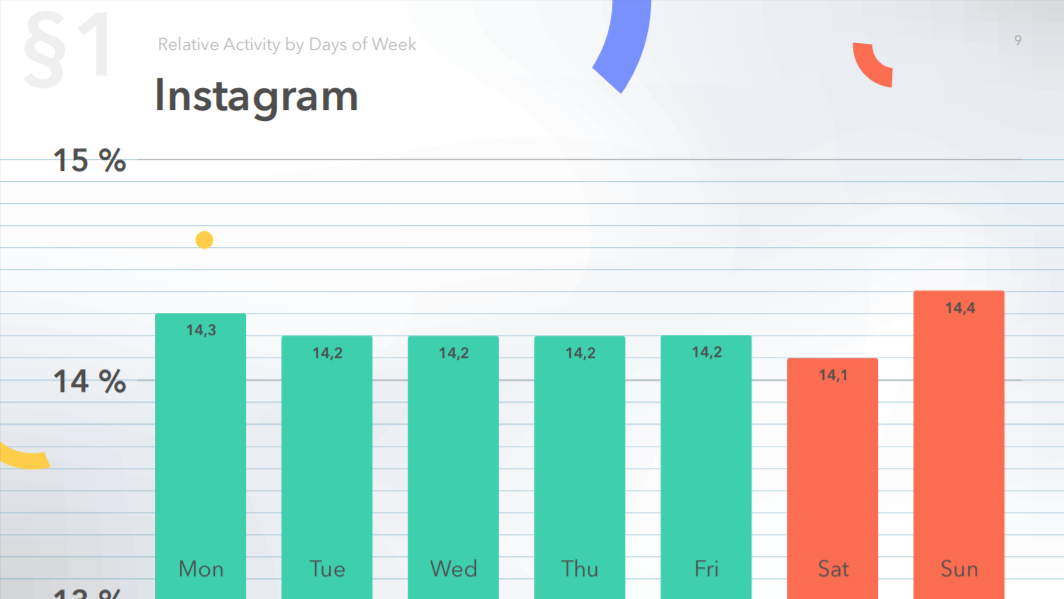 Twits, on the average, received the highest engagement on Monday, with a decrease on Thursday and Friday.

YouTube videos uploaded on Tuesday and Sunday saw the highest engagement, with Wednesday turning out to be the quietest day.

For all social media on the whole, the highest engagement was received by posts on Sundays and Mondays, with Wednesday being the worst day in terms of engagement. 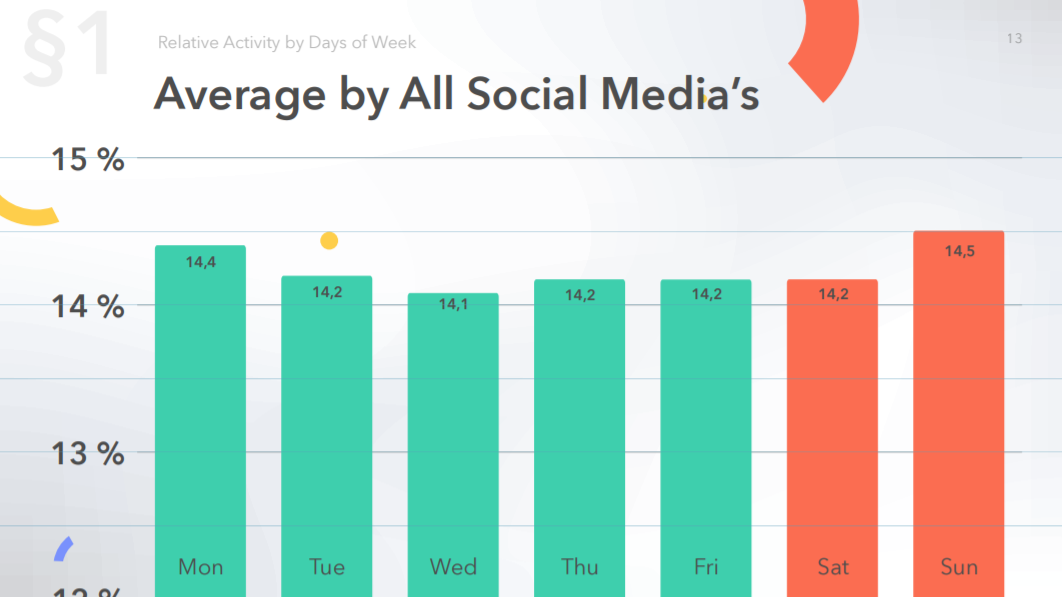 Audience Activity by Hour of the Day 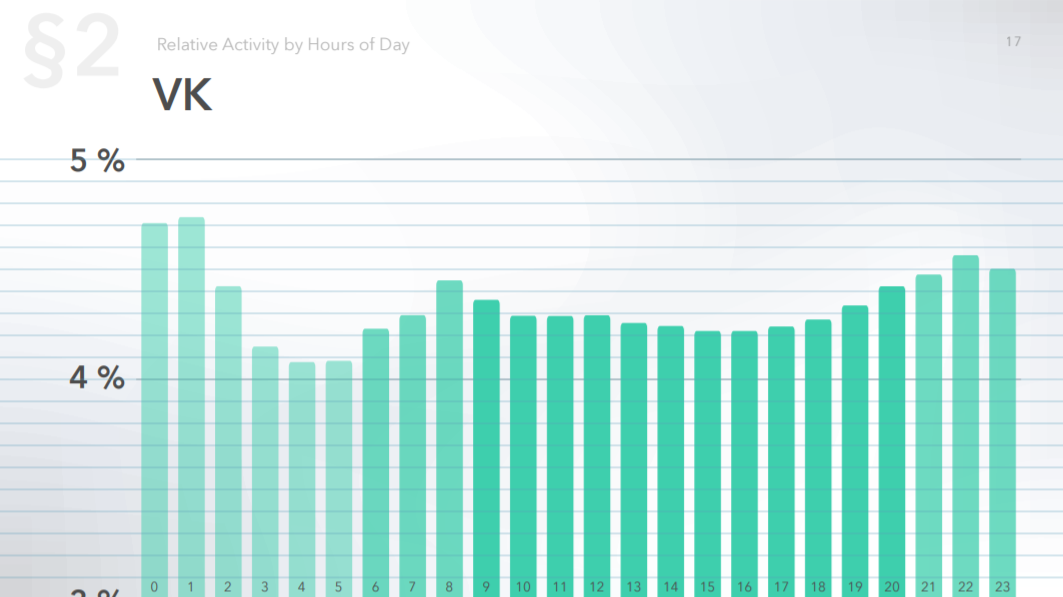 The situation on Facebook is different: the highest performance is shown by posts published between 3 and 5 p.m., with midnight being the worst time to post. 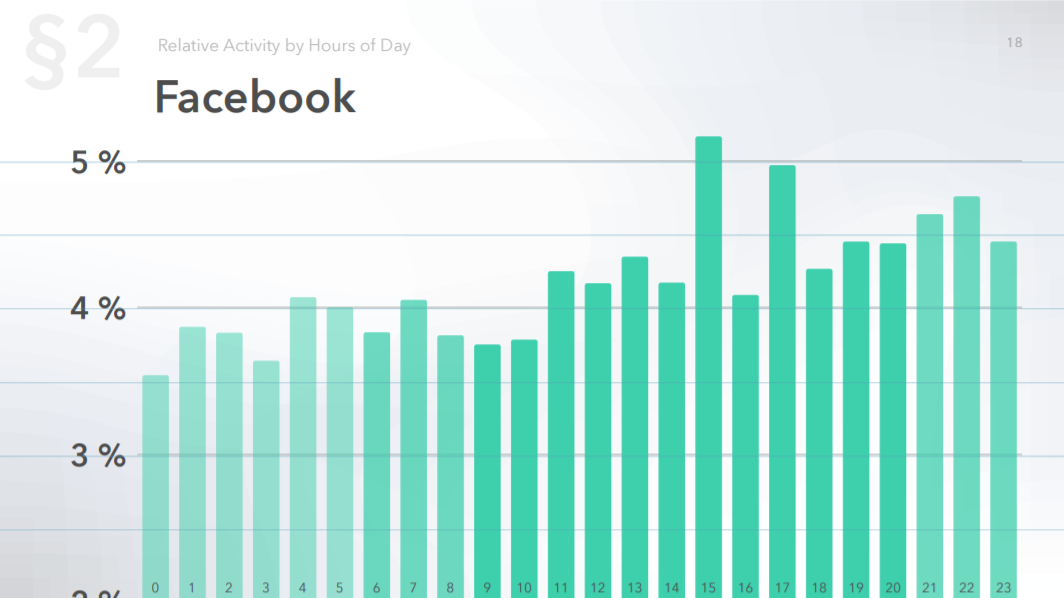 Instagram posts published between midnight and 7 a.m. receive least likes and comments. Two activity peaks on social network are noticeable: 10 to 11 a.m. and 8 to 9 p.m. 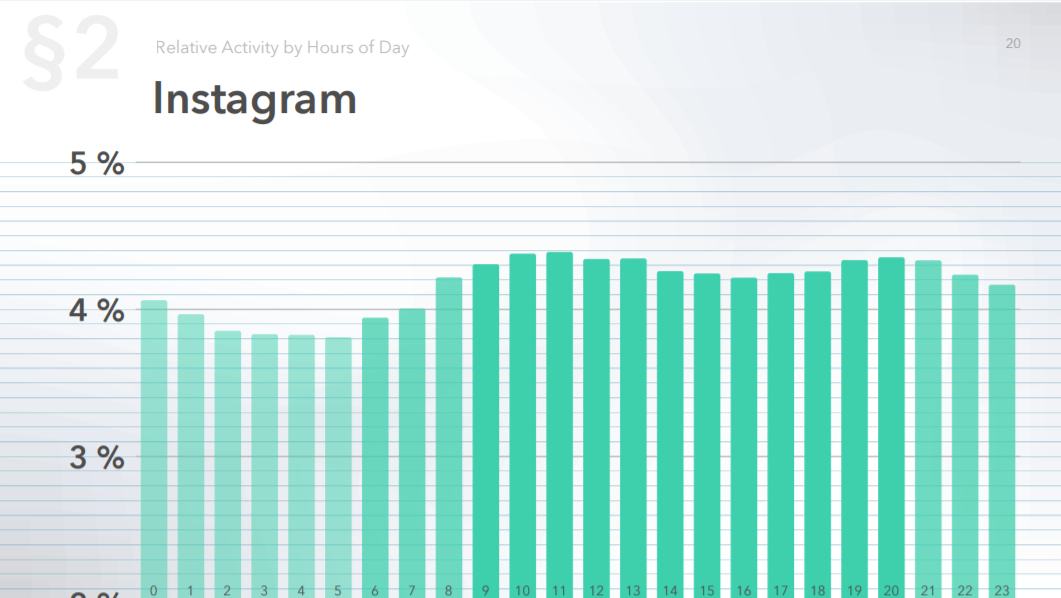 Twits receive the lowest engagement between 4 and 7 a.m. and the best time to post is 10 a.m.

On Telegram, the highest engagement is received by posts published at 3 and 10 a.m.

The diagram below shows average activity distribution by hour for all social media. 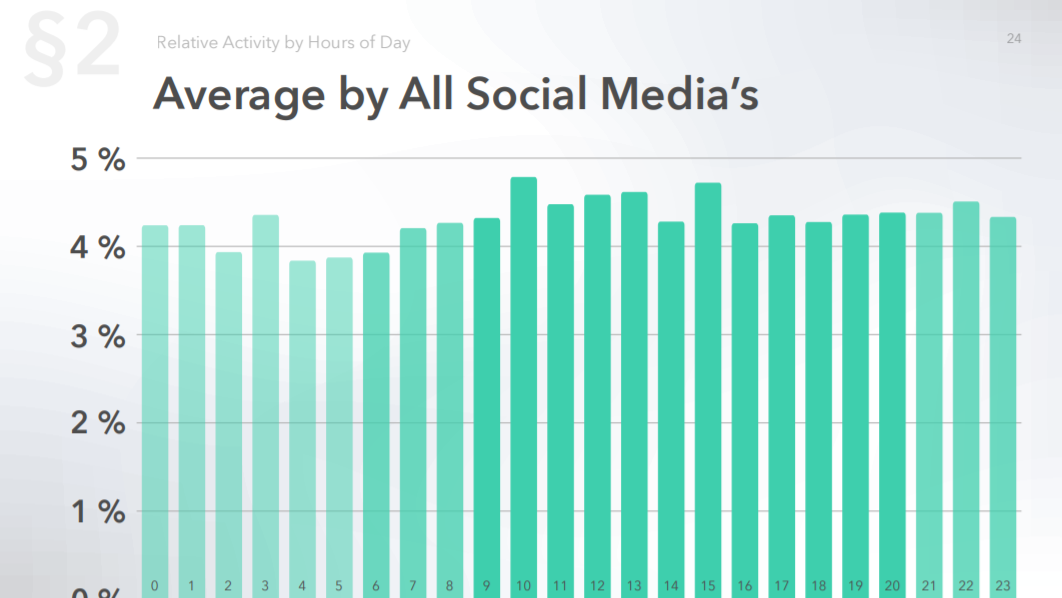 The Type of Content and its impact on Engagement

Popsters divides all posts into 4 formats: texts, images, videos, links. Now you will learn, how the type of content affects activity and involvement of subscribers on Social Media. 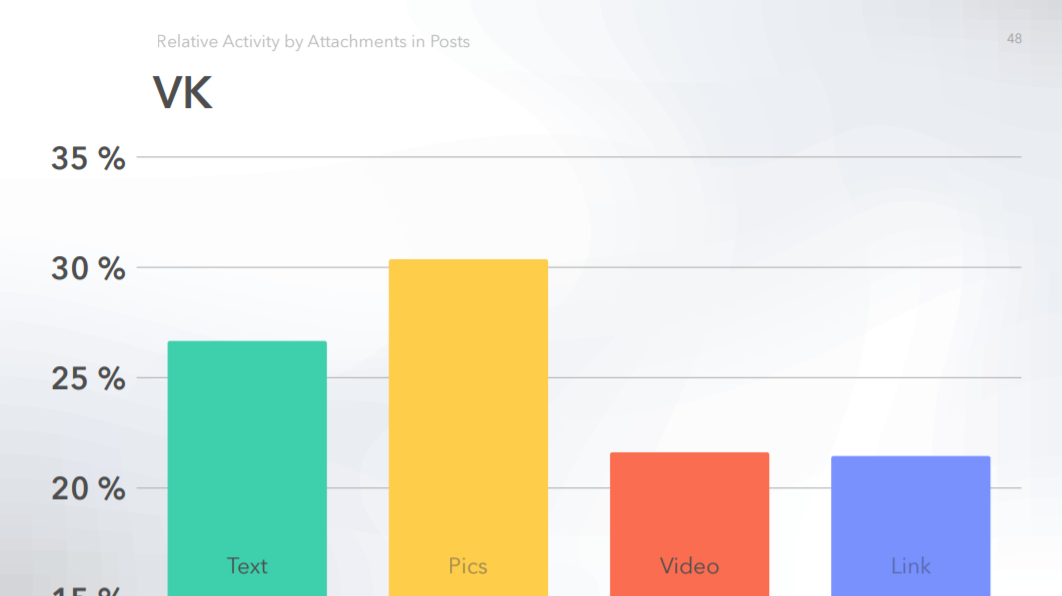 Posts on Facebook with videos perform significantly better and posts with links show the lowest performance. 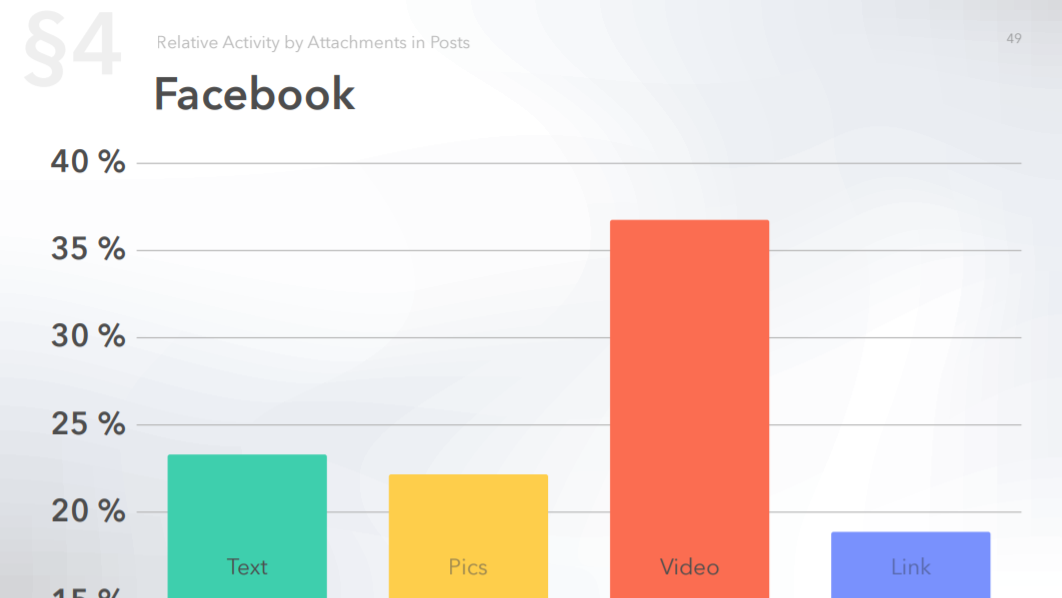 On Instagram, the content type influenced the engagement insignificantly.
For Instargam, a link is considered to be other account’s tag using @ in the description or links to external resources included in the description (despite the fact they are inactive). 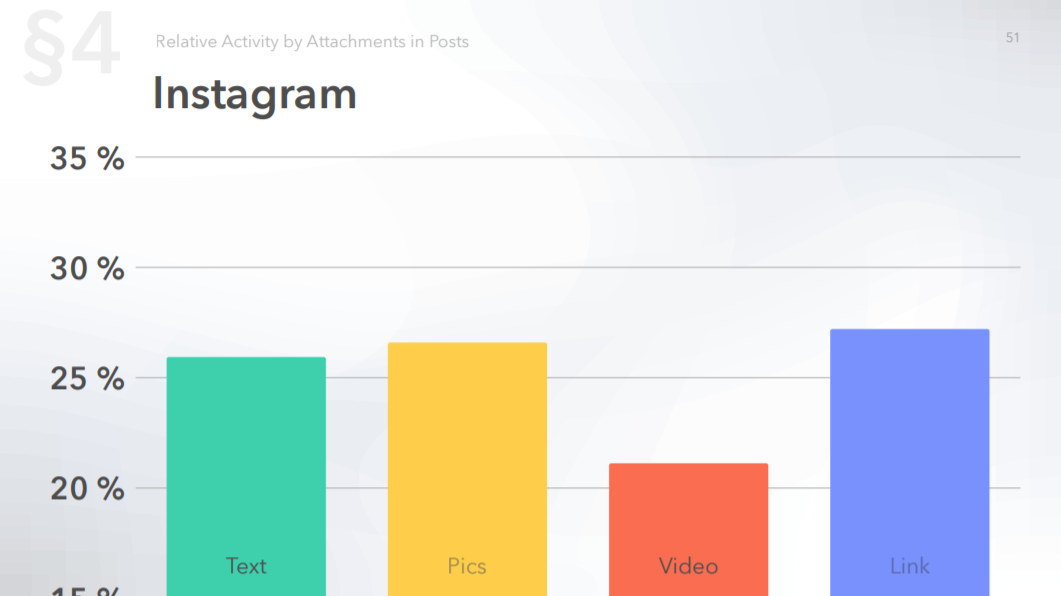 On OK.ru, the highest engagement was received by posts with text and users engaged least with posts containing a link. Posts with videos received less engagement than those with images.

The video format is significantly down on Twitter, with engagement distributed almost evenly among the other content types.

Telegram has a unique situation with images, being the only platform where this format performs worst. Probably, this has to do with the restriction on the image description length: most of the information is published separately from the image and the latter doesn’t receive forwards.

For all social media on the whole, images lead, with text being the second. Videos receive less engagement than images, and links, as expected, are the least performing content type. 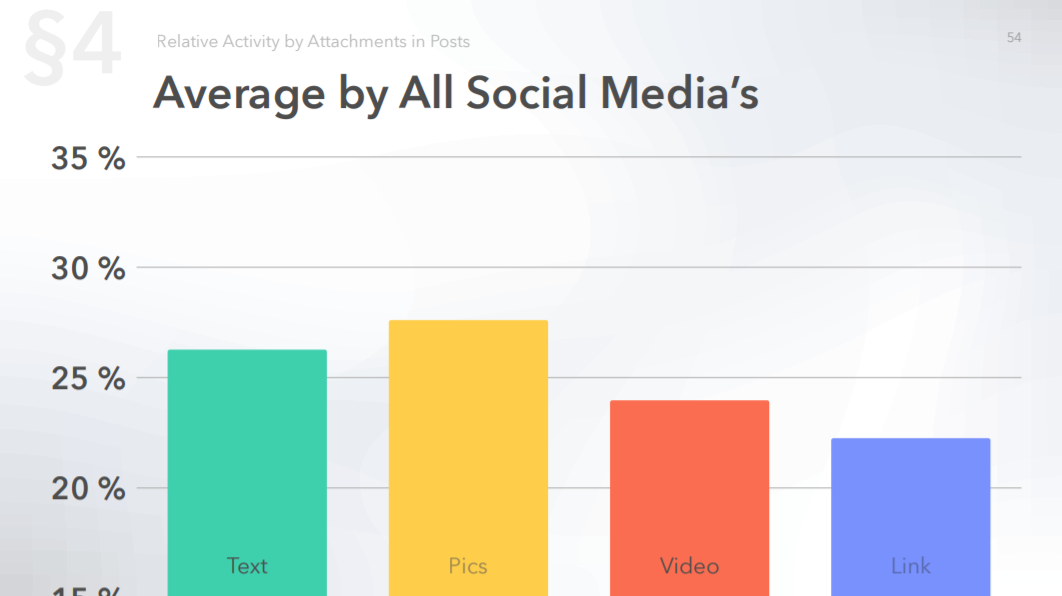 By paying close attention to Social Media content analytics, you can easily measure and improve your efficiency against your Social Media goals.

Engagement diagrams for posts with different text lengths illustrate the principle ‘the more the better’. On most of the platforms, the highest engagement was received by posts with lengthy texts.

On VK, maximum engagement was received by posts with short texts.

On Facebook, medium-length posts perform best and long posts turned out to have the poorest performance.

The situation on OK.ru is opposite: short texts perform better than long and medium ones.

The audiences of Telegram and YouTube engaged better with long texts and short texts received the least engagement.

Text Length / Day of the Week

For VK, short texts consistently lead for the entire week — even on Sunday when the interest in long-reads increases on other platforms.

For Facebook, long texts receive more engagement early in the week, starting on Sunday, but short texts outperform other text lengths on weekends.

For Instagram, the engagement distribution by text length remains constant throughout the week.

For Telegram, Thursday is for medium-length texts. Long posts lead on the other days. Users engage with them best on Sundays.

For all social media on the whole, the interest in a particular text length is influenced by the day of the week insignificantly. An increase in the interest in lengthy materials is noticeable on Mondays, Wednesdays and weekends and in short texts — on Sundays. 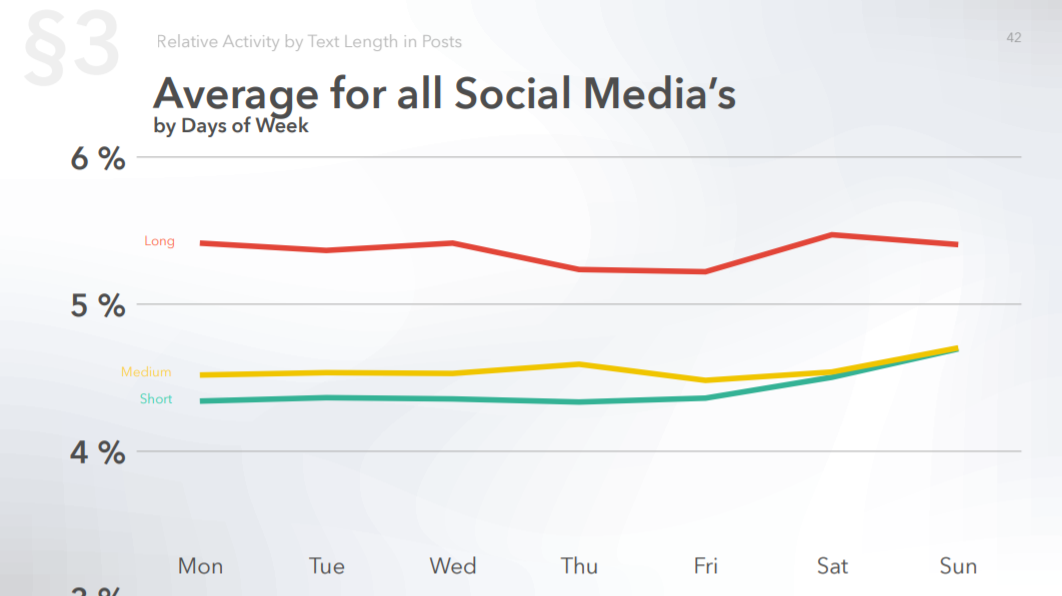 Text Length / Hour of the Day

The interest towards short texts remains almost unchanged during the day. A small increase is noticeable between 5 and 9 a.m. and between 7 p.m. and midnight.

Long texts lose popularity in the midday, with the periods performing best for them being 7 to 9 p.m. 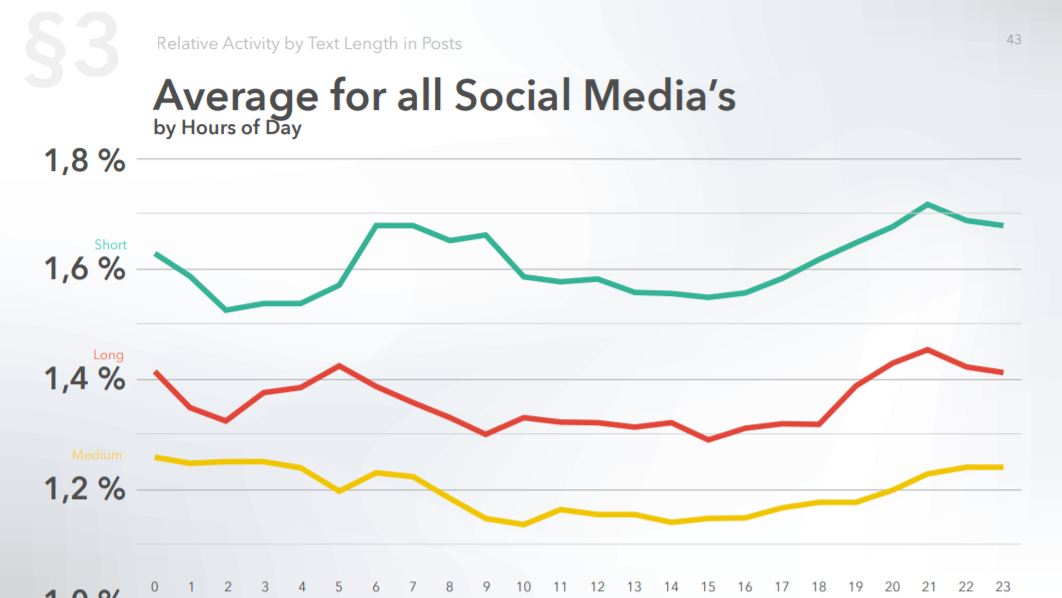 The situation with ER (ERpost in the diagram) is opposite: in small communities, every post receives better engagement. Total ER for all the posts of the day, however, increases in proportion to the subscriber count and post count. 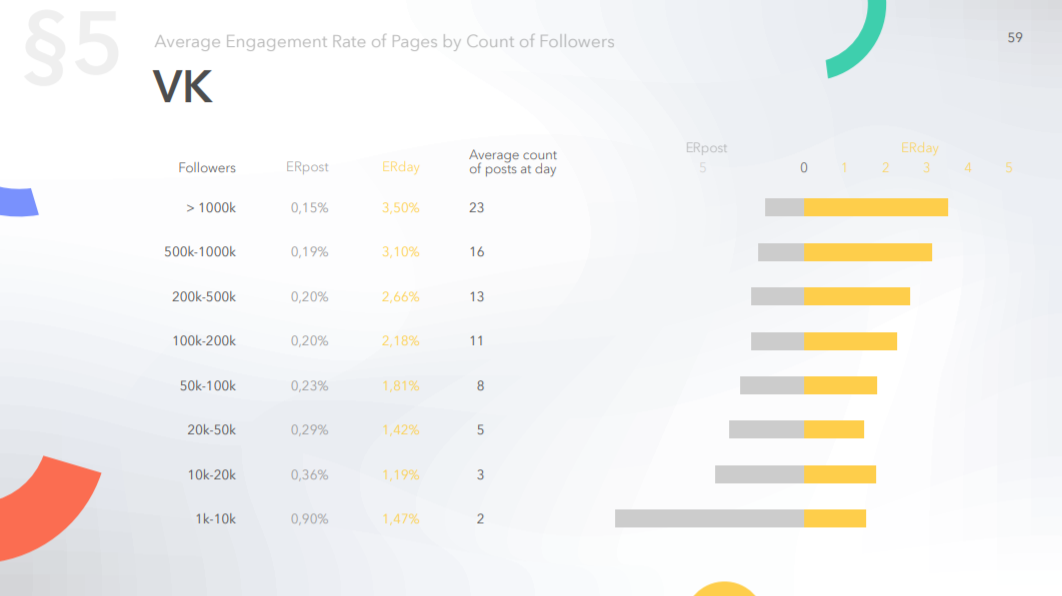 Major Facebook pages typically make more posts a day but have lower ERpost for each such post. 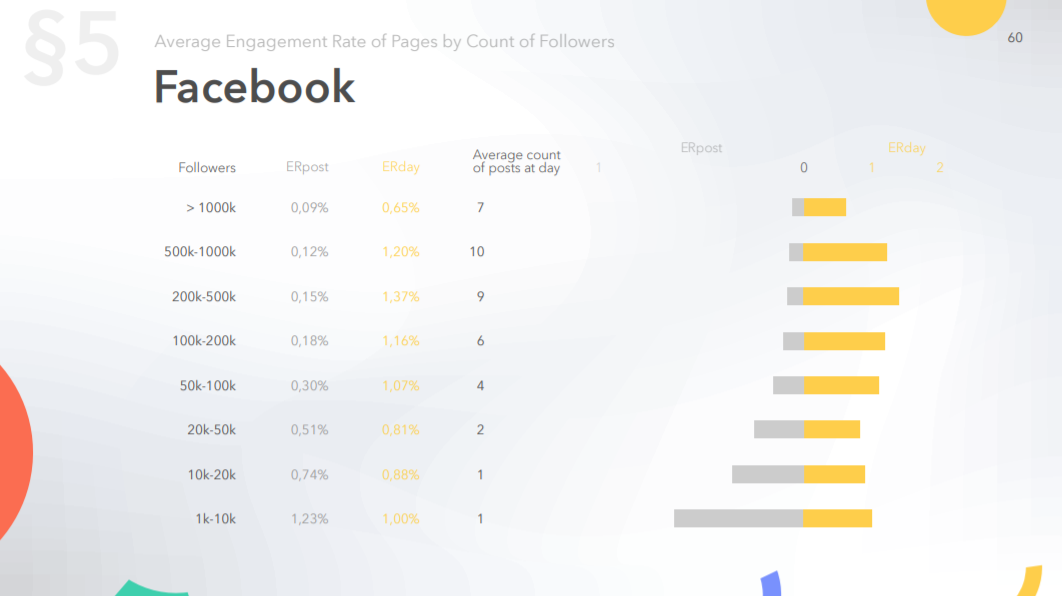 However, no significant ERpost drop is observed with increase in subscriber count from 50 thousand to million+ accounts: the indicator remains at 1.96% to 2.36%. 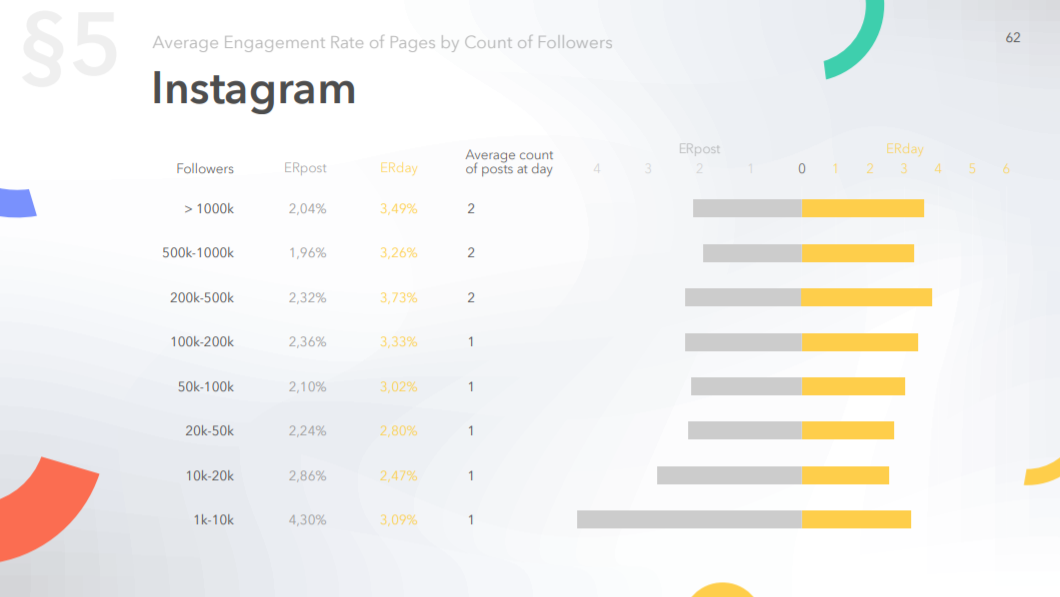 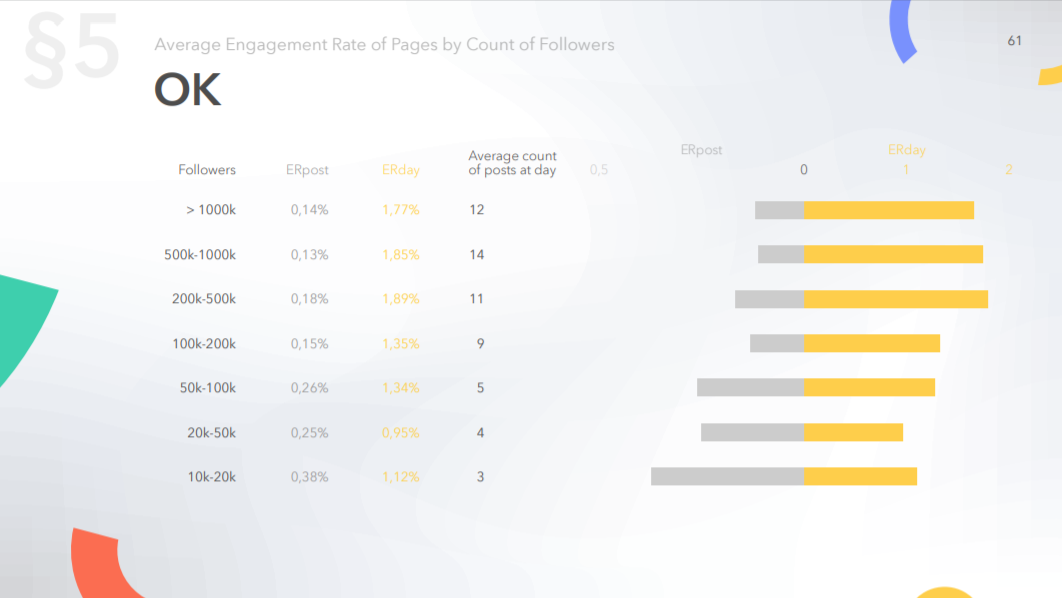 The best engagement per post was shown by small Twitter accounts (up to 10,000 subscribers) and large accounts have the worst ERpost. It’s worth noting that, in contrast to other platforms, ERday here doesn’t increase in proportion to the subscriber count and post count — every twit gains engagement on its own, independently of other content of the account. This is attributable to the Twitter’s new feed algorithms. 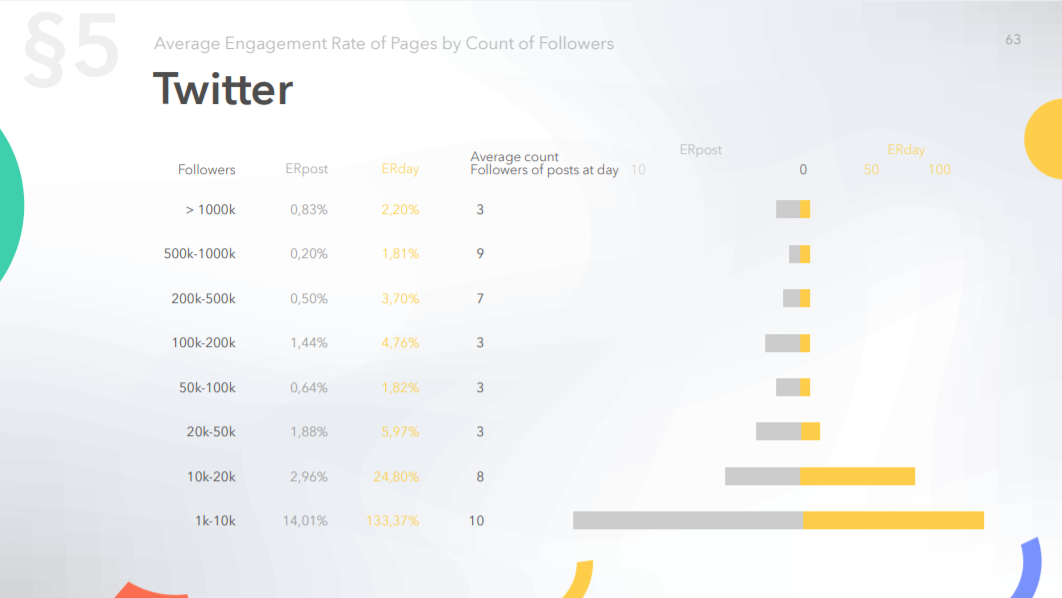 On YouTube, small accounts receive the best engagement both per post and on daily average. The reason is probably that creating video content takes more labor and even major channels do not publish several posts a day. 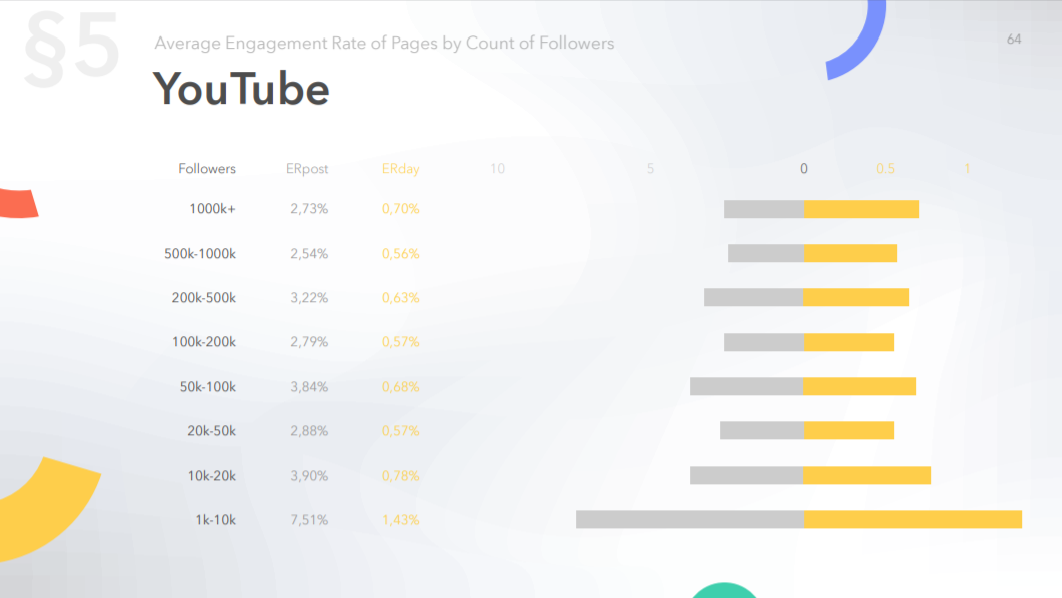 Now you know which factors affects subscriber engagement the most and how to significantly increase activity on social media.